Against the Odds 04: Berezina 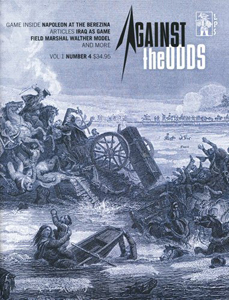 Napoleon at the Berezina is a solitaire game of the last major action of the 1812 campaign. Disintegrating as it moved along, the French army was faced with total destruction if the three converging Russian armies caught the French army with its back against the Berezina River. A way had to be found across the river before that happened.

Being a solitaire game, the player should imagine himself as the French side "fighting a colossus of blind automata". The solitaire rules combine a set of parameters for movement, with a system for authorizing Russian movement and other actions via a track that monitors overall Russian morale and successes to date to assist the player in running a challenging automaton.