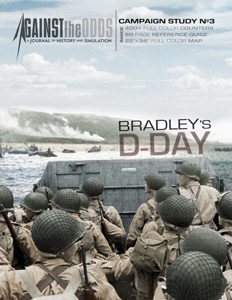 Twenty-five years ago, John Prados surprised the gaming community with Monty's D-Day, which looked at the D-Day operation from ONLY the British perspective. Now, after two decades of revising and rethinking, he offers the “other half” of the biggest story of WWII.

"Bradley’s D-Day" looks at the American efforts all along the right flank of the Normandy landings. While Utah seemed relatively easy, it was there, at Omaha Beach, where the Germans came closest to derailing the greatest sea-borne invasion of all time. Behind both beaches, two famous airborne divisions were scattered all over the countryside, and fought by twos and twenties to accomplish a semblance of their missions. Call it the “Longest Two Days,” because that is the time-period covered in the game. Forty-eight hours of some of the most critical action in American history.

The game includes over 400 counters, with mostly battalion and company-sized units. Hexes equal 800 meters. Turns are two hours of real time (four hours at night). And, something people really asked for in Monty’s comes to pass here, as "Bradley’s D-Day" includes rules and special tables for solitaire play.

The key units are all here, including engineers with special abilities, DD-tanks, parachute and glider landings, and even railroad coastal artillery. One defining feature of the game is unit deployment; a unit can be deployed in one of two modes: Movement Mode allows for the greatest movement but the weakest combat (which is not to say those units can’t fight) and Combat Mode, which allows the strongest fighting abilities (but still some movement for most units).

"Bradley’s D-Day" offers an intriguing scale, a moderate level of complexity, and an ease of play that will make this game either a fine addition to your Overlord collection, or a good first start for those who have not already focused on this campaign.