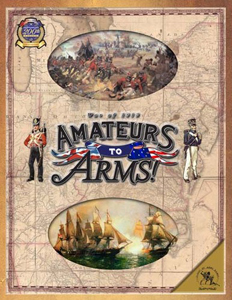 Amateurs to Arms! is a historical simulation game of the War of 1812. One player assumes the role of the British (including Canadian) forces, and the other plays the Americans. This often-overlooked conflict ended in a draw historically, but this was not the only possible outcome. The Americans clearly wished to annex Canada to their young nation, while the British wanted to teach their former colonies a lesson. The game includes all of the theaters of battle from the war: the US/ Canadian border and the Great Lakes (of course) but also the wilderness of the old Northwest, the Atlantic coast of the US, the Civilized Indians of the south, and the site of the final conflict at New Orleans.

Each turn represents a few months of time (depending on the season). A typical turn consists of dealing out to each player the number of cards indicated on the turn track. The winter and spring turns require a few special tasks. The Americans will have more resources to commit to the war- until Napoleon is defeated in Europe, and the English player can focus more resources on their efforts in North America. Each card can be played for the event described on the card, or for the card’s Operations Points, to move Expeditions, build ships and fortifications, or raise troops.

Events on the cards and on the map will cause the markers on the Peace Track to move forward. This represents the war weariness of each side’s people: bad events will cause your people to demand peace. Most events push inexorably towards peace; only a few rally your people for a longer war. When the two markers meet on the Peace Track, the game proceeds to the negotiations at Ghent, and the winner is determined. Oh yes, and then each player plays one more card, while news of the peace travels across the Atlantic!