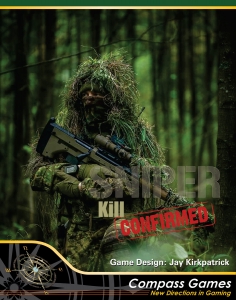 Sniper Kill Confirmed by Jay Kirkpatrick is a card-driven solitaire wargame. YOU take the role of a sniper and his spotter in search of your target and completing your mission.

“The most deadly thing on a battlefield is one well-aimed shot.”  — Sgt. Carlos Hatchcock

You and your spotter enter play on one of four terrain maps: jungle, desert, countryside, or ruined city. Though you are at distance from your mission target, you will need to score morale points to be able to move into new zones, getting closer to your target. As you do, enemy hostiles may be seen, forcing you to avoid detection or they may need to be engaged to complete your mission. Movement into new zones closer to the target, is achieved by KIA enemy hostiles which gives you morale points that are expended in order to move but beware of the trip wires and claymore mines. Doing this all the while trying not to draw too much attention to yourself. The enemy may call in reserves looking for you. Many items may help you such as scopes and med kits and other useful equipment.

A hand of cards gives the player options to fire, move, crawl, and hide. Location cards are used in each zone and the player will gain cover from these cards but also may find a surprise event. The player will need to earn morale points to be able to move into the next zone, these are earned by killing enemy hostiles. A player only has a certain number of wounds that can be taken during a mission and critical wounds will see the player in real trouble. Taking a shot is a tense moment the wind and other factors could affect the shot, if missed enemy hostiles will move closer towards the sniper and may even attempt to conduct an assault against them.

Not only may single missions be played. A campaign is also possible consisting of ten missions. As each mission is completed, you will accumulate kill points which may be used to upgrade your weapons or obtain additional equipment.