Against the Odds 32: Birth of a legend 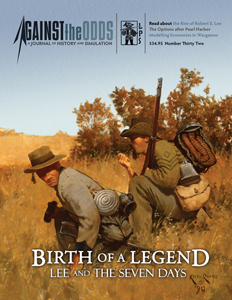 Simulation of the Seven Days' Battles which started Robert E. Lee on the road to glory. Birth of a Legend was published in Against the Odds No. 32.

The setting is the Union’s Peninsula Campaign in the spring of 1862. McClellan has formed and trained a large army, transported it by sea in an outflanking maneuver, marched it to the gates of the Confederate capital, and is poised to capture the city and probably bring an end to the rebellion. On the Confederate side Lee has taken over the Army after Johnston was wounded. Unlike Johnston, who was content to fight a largely defensive campaign, Lee gathered every unit he could get his hands on and launched his own offensive. The Union had placed its army in an awkward position, with one corps north of Chickahominy River and the rest south of it. Lee’s plan, and the position of the units when the game starts, was to crush the Union Corps and then drive the rest of McClellan’s army from the capital, destroying as much of it as he possible could. With that accomplished he would have a free hand to turn north.

The game features leaders who are rated for initiative and combat effectiveness. Another mechanism in the game is the “advantage” marker which can be traded to the opponent to do things like rally, conduct a combined assault, declare a heroic defense that turns a success into a stalemate, or receive additional replacements.

The unit scale is divisional including artillery and cavalry.

There is the campaign game, and a few optional rules. Playing time should be under three hours between experienced players.