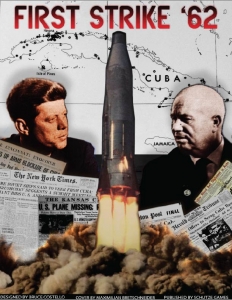 In First Strike '62, the players are transported back to the middle of the Cuban Missile Crisis. Using historically accurate strategic (i.e. Nuclear) force structures, the players will be responsible for fighting the war on a global scale when the diplomats fail.

Rather than concern themselves with the operations of Army Corps and Naval Task Forces, players will be directing B-52 bomber wings of SAC or the Strategic Rocket Forces' new SS-7 "Satan" ICBM's.

Of course the new Soviet missile complexes on Cuba still retain their importance as a dagger aimed at the heart of the USA and will have to be factored into both sides' plans. The surprise potential of these weapons are accounted for in the radar rules.