The Russo-Georgian War of 2008 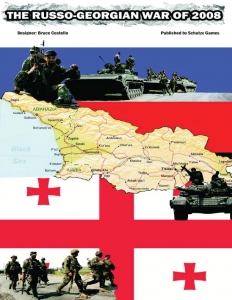 The Russo-Georgian War of 2008 is a simulation game covering the military action during that conflict from August 8, 2008 through August 12, 2008. This involved full-on combat between the Republic of Georgia and the Russian Federation, which is supporting the two breakaway regions of Abkhazia and South Ossetia.

The fighting began in the Ossetia (the primary Georgian target) and quickly spread to all of Georgia and Abkhazia.

At first glance, this seems like a fight between David and Goliath - the vast Russian military against a state with only about 20,000 active duty personnel in its military and only 7 combat jets - but closer examination reveals it was a somewhat stiffer competition with several points of interest. It was with this thought that this game was inspired.

The boxed edition also includes a major variant covering the earlier near war of 2004.