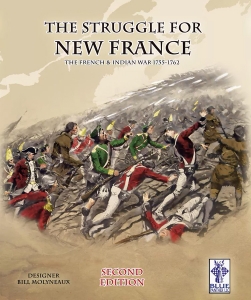 The Battle for New France is an introductory level point to point movement war game for the Seven Years War (1755-1762), focusing on events occurring in North America as a grand campaign game.

The game focuses on ease of play with the use of cards to determine reinforcements, political issues and supply problems with out creating a lot extra rules. The Indians of North American and how they influenced the French and Indian war is well represented along with leaders and special units such as Roger's Rangers and seige guns.

Struggle for New France is a two player game but may also be played solitaire. Players will need to move their army points along the point paths and also with the use of their combat cards to outguess what their opponent is also trying to do. The playing cards effect may aspects of the game from supply, political issues and reinforcements. However the cards do not make the game since you are only allowed to play one card per turn.

This 2nd edition includes refined rules and all new artwork.