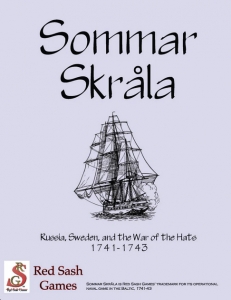 Back in stock soon
Avaibility planned on 30 October 2022

Control the seas and you control the course of war.
Whichever side you choose, glory and honor are yours for the taking.
Provided you avoid court martial and disgrace.

Somar Skrala (Summer Squall or Summer Shout) is a naval war game for two players set during the years 1741-1743. It explores the roles of the navies of Sweden and Russia, both of whom employed galleys in addition to sailing ships. Scale is "operational" -- that is, the playing pieces represent squadrons of as many as four ships, rather than individual men of war.

Combining Somar Skrala with A Lesser Wrath:
The game A Lesser Wrath is the companion to this game. It is Volume IX in the Lace Wars series and covers the war on land, also at the operational level. Both games can be played separately, but this box contains rules for combining them in a Grand Campaign scenario suitable for four players.