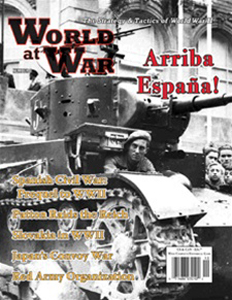 The wargame featured in that issue will be Brian Train’s Arriba Espana: The Spanish Civil War, 1936-39. It’s intended for two-player play, one representing the left-wing coalition government of the Spanish Republic, and the other the alliance of right-wing forces that rose in revolt against it. Solitaire play is doable.

The 34x22” area-map shows all of Iberia and is divided into regions, each with its own name. A region may be in one of three states: government control, rebel control, or contested, meaning neither side controls it. Getting and maintaining control of regions is central for keeping your units supplied and for gaining a high political support level. Each region is subdivided into one or more areas corresponding to that region’s component provinces.

Each winter game turn represents three months, while those at the other times of year each represent two months.

Most of the 280 iconic counters are military units; however, their scale is abstract, with each generally representing groupings of two or more historic regiments, brigades or divisions. There are also 16 new variant-add-on counters included for issue number one’s Barbarossa game.

There are four armed autonomous regions in the game: Asturias, Basque, Catalonia and Santander. The Government player controls those units along with the Popular Army, the anarchists, the Marxist POUM, and the international brigades. The Rebel player controls Nationalist, Carlist, colonial, Portuguese, German and Italian units.

There are 8,632 words in the rules. That works out to mean two experienced players can finish a game in about four hours.

The table of contents is shown below.