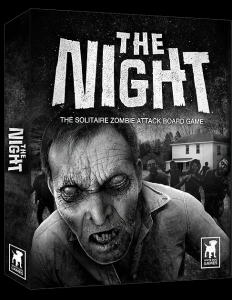 The Night is an exciting and fast-paced board game featuring a group of refugees who are fleeing a widespread outbreak of the undead. As night falls, the refugees find themselves in an “abandoned” middle-class home in a pleasant, midwestern community, perhaps an archetype of small-town Americana, the occupants of the home apparently having wisely fled earlier. The frightened fugitives in our story (herein referred to as “humans”) must defend themselves against slow-moving, but purposeful, flesh-eating creatures (we know them as “zombies”) during the long night, using their wits and whatever weapons or tools that come to hand, to survive until dawn.

The Night is inspired by and pays homage to the George A. Romero cult film classic “Night of the Living Dead”, now in public domain, which played a big role in creating the prolific zombie genre in film, books, and games.

You play the side of the human characters and solitaire rules guide the play of the undead.

The following items are to be found with your game:

One 22 x 17-inch Game Board with a one-inch squares grid map of the house and yard where the game is set.

One 8-page “Example of Play” booklet.

One reference map-sheet of the house with a Turn Track.