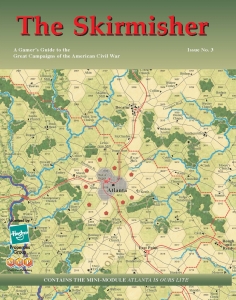 Skirmisher 3 is the third magazine in the award-winning Great Campaigns of the American Civil War (GCACW) series of games.

Skirmisher 3 is centered around the module Atlanta Is Ours (AIO), so it is recommended that players should own this game to fully enjoy all the elements of Skirmisher 3.