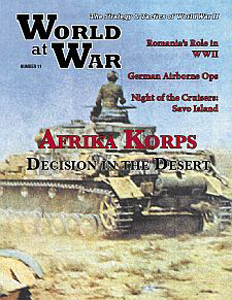 Afrika Korps: Decision in the Desert, 1941-41, simulates the campaigns in the Western Desert in which Italo-German forces under the command of Erwin Rommel took on the forces of the British Empire.

The game map shows the Egyptian/Libyan coastal area as it was in 1941-42. Each game turn represents one month. Each hexagon on the map represents 12.5 miles (20 km). There are two scenarios, short (May-November 1941) and long (May 1941 to November 1942). Afrika Korps is a two-player game of intermediate complexity. The rules contain about 15,000 words, meaning experienced players can finish the short scenario in about four hours. Solitaire play is doable.