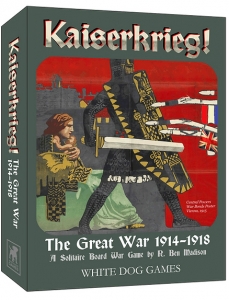 “Kaiserkrieg!” (‘Emperor’s War!’) is a strategic solitaire game of the First World War of 1914-1918. As the player, you control the Central Powers (“CP”; Germany, AustriaHungary, Turkey and Bulgaria). The game’s automatic systems direct the efforts of the Entente Powers (“EP”; France, Britain, Russia, Italy, Serbia, the United States, and their minor allies) who are trying to defeat you. As in many of Ben Madison's games, you play the “bad guys.”

The heart of the game is its depiction of the ground war, which saw the battlefield deaths of some ten million soldiers. Kaiserkrieg’s treatment can be traced back to Darin Leviloff’s inspired Israeli Independence (2008) and the “States of Siege” system it started. The evolutionary leap in Kaiserkrieg! is the shift from the old ‘horizontal’ States of Siege model – where enemy forces converge on your central position along clearly defined lines of advance – to a new ‘vertical’ model where enemy forces mass in separate regions around you, to eventually achieve an advantage in size that threatens your overall position. This adaptation allows Leviloff’s original concept to more closely simulate the trench warfare realities of World War I on the continental level.

The game also depicts the epic naval struggle of pro-German blockade runners trying to evade fleets of British cruisers. Many historians identify the failure to outwit the British naval blockade as the main reason for Germany’s defeat in the war.

The ‘sideshow’ war in the Near East, where Germany’s Ottoman Turkish ally was assailed by Russia and the British Empire – including a massive army of Indian troops – is also simulated. This theater also includes East Africa, where a German-led Black African army (the Askari) held out against Indian and British Empire forces even after the Germans in Europe had surrendered!

The game is an uber-strategic view of the conflict. Some aspects are dramatically simplified to make it playable and to emphasize the “cool stuff” of World War I, like Zeppelins, trenches, and U-boats. Kaiserkrieg! is not a detailed historical simulation, but a fun and challenging game covering the salient themes of the actual conflict.