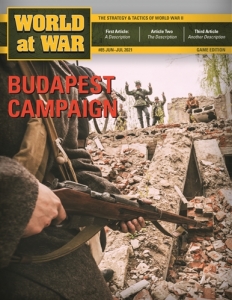 Budapest Campaign: October 1944 to February 1945 is a wargame of the Soviet offensive in Hungary in late 1944 and early 1945 which culminated in the conquest of the city of Budapest. Throughout this campaign the Axis launched successive counterattacks which regained ground but, in the end, failed to stem the Soviet tide.

There are two players: Axis and Soviets. Each side is divided into sub-commands. For the Axis, this includes Armee Kommando Nord, Armee Kommando Sud (these are not historical designators but are based on German operational practice by this period), and Hungarian forces. The Soviets have Second and Third Ukrainian Fronts, as well as the Romanian army.

Budapest Campaign ends just prior to the start of Spring Awakening (World at War #73) which covers the final German offensive on the Eastern Front. Both games use a variant of the DG Boots system to model command/control and logistics. Various command markers activate player sub-commands and launch major offensives.