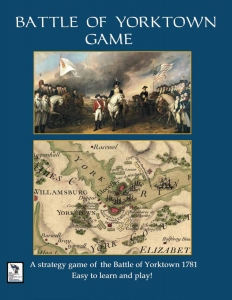 Fall 178I- American General Washington and his French allies have trapped the British army under General Cornwallis at Yorktown. Cornwallis is awaiting aid from General Clinton and is fighting a delaying action. He is confident his men can hold off the inferior American forces and the French.

The Battle of Yorktown is a low to moderate complexity tactical game covering the Franco-American attack and siege of Yorktown during the American Revolutionary War.