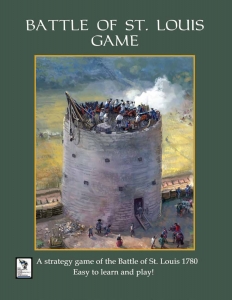 May 26. 1780- Spain has entered the American Revolutionary War against Great Britain and George Rogers has captured the British Illinois Country.

Orders are given to sweep the Spanish and Americans from the Mississippi River Valley starting with St. Louis. Over 750 British led troops arrive outside the town intending to overwhelm the defenders.

The Spanish have only 29 regulars but are aided by St. Louis and St. Genevieve militia and some free black townsfolk who are determined to defend St. Louis.

The Battle of St. Louis 1780 is a low to moderate complexity tactical game covering the British/Native American attack on St. Louis during the American Revolutionary War.