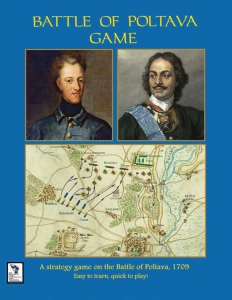 July 1709 - The Swedish King and Great Captain Charles XII has invaded Russia and is besieging the Russian town of Poltava to bring the Russians to battle.

Russian Tsar Peter has arrived but has sheltered the bulk of his army in a fortified camp fit and has built several redoubts to cripple any Swedish attempt to attack. The Swedes are undaunted and although their King is injured and has to be carried in a litter, are they prepared to annilihate the Russians in attack.

The Battle of Poltava is a low to moderate complexity tactical game covering the climatic battle of the Great Northern War in 1709.