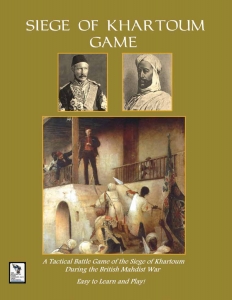 The Sudan, 1884-1885. The Mahdist revolt has proven wildly successful and their wave of conquests have isolated the important town of Khartoum.

The British have sent General George "Chinese" Gordon to organize an evacuation. Gordon defies the British Government and organizes a defense until the British send a relief force.

The Mahdists must capture Khartoum before the relief force arrives and destroy the legend of Gordon.

The object of the wargame for the Mahdist player is to capture Khartoum while the Egyptian player attempts to hold out until British reinforcements arrive.

The Siege of Khartoum utilizes a game system based on The Historical Game Company’s earlier "Battle of Quebec" wargame.