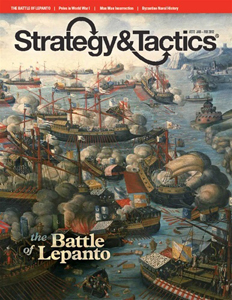 Lepanto is a two-player or multi-player (Ottoman versus Christian) operational level game, designed by Robert Cowling. The game includes 280 die-cut counters, with the each warship chit representing two ships per counter; there are three primary ships types: Galleys, Galliots and Galleasses, each with different capabilities. The colorful map features the Ionian Sea, printed with the historical set up of both sides just as the two opposing fleets were arrayed to begin battle, as well as various charts and tables for easy reference during play. The land area featured represents the peninsular areas of the Grecian mainland.

The easy and quick game sequence is as follows:

Victory in the game is determined by the accumulation of VPs for eliminated and damaged ships that have been inflicted by each side.