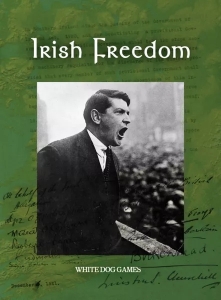 Irish Freedom is a solitaire wargame that simulates the Irish War of Independence from 1919 to 1921 and also covers the Irish Civil War from 1922 to 1923.

As the player, you play the Irish rebel forces fighting for Independence against the British in the War of Independence. If you are successful in this, you then play the Free State forces against the Republican enemy in the Irish Civil War. Alternatively, you may play either war as a stand-alone game.

Game play involves moving your forces, represented by counters, on a map of Ireland. You can also raise fresh forces to help your armed operations.  A simulated enemy move will attempt to prevent your victory. Victory is achieved by a combination of how quickly you can win the War of Independence and how quickly/completely you can win the Civil War.

The game comes with:

The 17" x 11" game map shows Ireland divided into six Regions, each of which is divided into four Areas. The six Regions correspond to broad geographical portions of Ireland, concentrating on those where the fighting was heaviest:

1. Dublin – This represents the city of Dublin, as well as the surrounding counties.

2. Midlands – This represents the central portion of Ireland. A geographically large area which saw little fighting.

3. Ulster – Consists of both the six counties now comprising Northern Ireland and other parts of Ulster, notably Donegal.

4. The West – The West coast from Limerick up to Sligo. Includes the counties of Limerick, Mayo, Galway and Clare. Only Limerick is represented as a city due to its strategic value.

5. Cork – Covers the Southern portion of Ireland from Cork city in the West to Wexford in the East.

6. Kerry – Although this is the smallest Area, it was the heartland of the rebel forces fighting the British and the “Munster Republic” fortress of the Republicans in the Civil War. As well as county Kerry it includes West county Cork.

Each Region is numbered as above so you can determine a Region randomly by rolling a six-sided die (“D6”). You will need to provide this yourself.

Regions are connected to each other – roads show which Region connects to which other Region. For example, Kerry connects to Cork and The West. The red die numbers where the road joins the Region are used to determine a road randomly.

Within a Region, the four Areas are also numbered so that one can be randomly selected with a roll of a D6.

There are two sets of nine cards. These cards add additional historical flavor to the game by generating random events, but could be omitted if desired. They are labelled on their back whether they are to be used for the War of Independence or for the Civil War only.

There are 88 counter in the game, most representing the fighting forces. British forces have a red or orange background, Irish have blue or green.

Red represents Crown forces – there are 3 types of these:

• Tans – The infamous Black and Tans.

• Guerrillas – The mainstay of rebel forces.

Every armed force counter has 3 ratings. These are their strengths (from top to bottom) in Bogland, Townland and City terrain. For example, the Flying Column (see image to left) is 3 at the top, 2 in the middle, 1 at the bottom. Therefore, it has a strength rating of 3 in Bogland, 2 in Townland and 1 in City terrain.

All units can move within a Region from one Area to any other Area, except for Mobs, which cannot move at all.

All units can move between two Regions along a road, except for Guerrillas, RIC, and UVF (and Mobs).