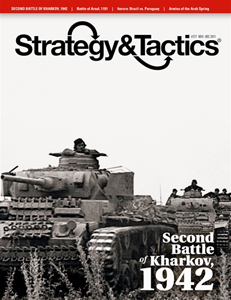 Second Kharkov: Strike & Counterstrike, May 1942 (2K for short) is a low-complexity, two-player wargame covering the second battle for that city fought during the early period of World War II’s eastern front. The game begins with the Soviets on the all-out offensive, but its second half is dominated by a German counterattack.

There’s a historical scenario covering the battle as it was fought, plus a what-if scenario that allows players to explore the possibilities inherent in the all-out effort originally proposed to Stalin by Marshal Timoshenko. In it, the Soviet player begins the game with the historical force along with a total of 26 more rifle divisions and tank brigades: everything that was then in the Soviet strategic reserve. Of course, to win that scenario the Soviet player needs to accomplish a lot more than he does in the historical one (capture all three hexes of Kharkhov).

Each hex represents five miles (eight km) from side to opposite side. Each game turn represents two days. Each unit of maneuver represents a division or brigade of roughly 2,000 to 14,000 men and 50 to 400 armored fighting vehicles.

A. German Movement or Combat Phase

B. German Combat or Movement Phase