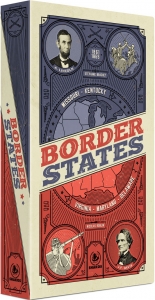 1861. Civil erupts across America. Abraham Lincoln and Jefferson Davis vie for control of the nation’s destiny, with both understanding that the struggle is as much political as it is a process of arms. Victory in battle will provide the most persuasive political argument when it comes to the five slave states bordering those already in contention – Delaware, Kentucky, Maryland, Missouri, and West Virginia. These are the states both the Confederacy and the Union need to win over. In each case, how these scales will tip, favoring either abolition or those who endorse the doctrine of human “property,” is yet to be decided. Battle and politics will sway the balance, and the result will help tell the story of this bloody war.

Border States is a tactical game for 2 players, with each player taking control of one side. Your aim is to win the sort of decisive victories that will influence the Border States and rally them to your cause. Effective bluff, and at the same time being able to discern your enemy’s intentions, will be your best assets. Playing time is about 45 minutes.

There are two ways to win the game: control sufficient States tokens to win by sudden death, or be the player with the most victory points at the end of the 5 rounds.