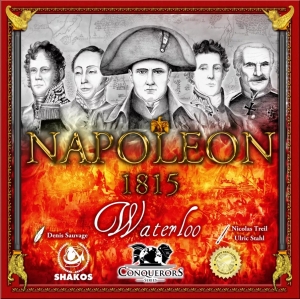 History has written the story of Waterloo many different ways, but, in the end, it is always the same story.

This is your opportunity to write something different.

Napoléon 1815 is the third installment in The Conquerors, a series devoted to the great strategists of history. Following on from Napoléon 1806 and Napoléon 1807, Napoléon 1815 brings its own unique challenges to this well-tried and highly acclaimed campaign system.

For up to three players, assume the role of Napoleon, Wellington, or Blucher, making the key decisions that will determine the fate of Europe. As Napoleon, will you adopt your own version of his “strategy of the central position,” driving a wedge between the enemy armies and then annihilating each of them in turn? Or perhaps you will choose a different course, or find that change is forced upon you?

Time is of the essence, for if the armies of Wellington and Blucher do join, the emperor’s final throw of the dice is likely to end in defeat.