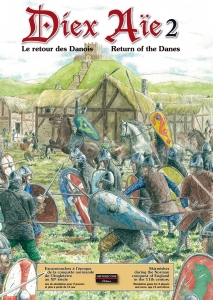 DIEX AÏE 2 ("God help us!", The battle cry of the Dukes of Normandy) traces the resistance of the Saxons to the establishment of the "Norman yoke" in the decades following Hastings. DIEX AÏE 2 offers a campaign game to generate tactical scenarios that are played on the maps in the series. DIEX AÏE 2 is the continuation of the popular GUISCARD 2 game. Like the latter, DIEX AÏE 2 is a complete game, with counters, maps, rules, scenarios and play sheets.

DIEX AÏE 2 is an updated and augmented version of the original DIEX AÏE game which is now out of print. It adds a new faction with the Danes, a new Saxon Village map, harmonized rules with the latest games in the series and 5 new scenarios.

What's in the box