The Russian Empire Strikes Back: Lodz 1914 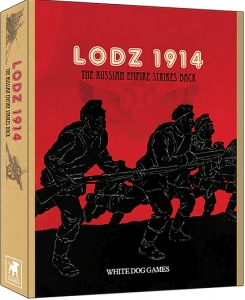 Lodz 1914 is an operational level war game of the first battle of Lodz in 1914 (11 November to mid-December) for two players. Rules for solitaire play are provided. The German Ninth Army was ordered to attack Russian forces preparing to invade German Silesia. In fierce winter weather, the Germans drove apart the Russian First and Second Armies near Lodz. The Russian Fifth Army marched seventy miles in two days and attacked the German Ninth on its flank, which subsequently had to fight its way out of encirclement. The result was a classic battle of maneuver which historically was a tactical Russian victory but a strategic German win as it kept Russian troops from German soil for the remainder of the war.