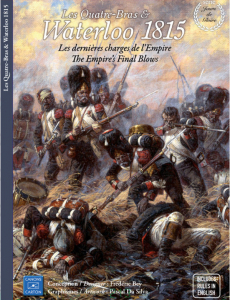 Les Quatre-Bras and Waterloo 1815 is a complete game in the Jours de Gloire series. It covers the battles which occurred on June 16th and 18th, during Napoléon’s offensive in Belgium against the armies of Wellington and Blücher.

Les Quatre-Bras 1815 involves Ney and a single French corps attempting to secure a strategic crossroad defended by detachments under the Prince of Orange and Wellington.

Waterloo 1815 is the most famous and the most decisive battle of the Napoleonic era. The Emperor's last gambit was to achieve a great victory before Wellington and Blücher could unite their armies.

Les Quatre-Bras, June 16th 1815: Ney vs. the Prince of Orange and Wellington

Les Quatre-Bras and Waterloo are the 39th and 40th battles of the Jours de Gloire series.

The game includes an A1 map (backprinted), a color player aid, 434 counters and markers and 8 bags for the counters.

Rules and Charts are available in English or French (two different versions).