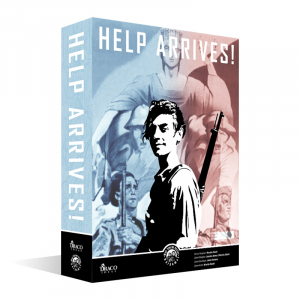 The Spanish Civil War, recreated in this tactical wargame with a classic “hex&counter” flavour. Choose your side! You can fight not only with the main Spanish military units, you’ll have international support, too. International Brigades, Corpo Truppe Voluntarie, Condor Legion, soviet T-26B, German Pz I Ausf A, POUM militias, all of them will fight in the fierce battles that Help Arrives! brings to your table.

With the improved version of War Storm Series system rules, it adapts the series to the conflict and introduces campaigns such as the Battle of Madrid, Guadalajara or the Ebro, and more.

In addition, the new Tactical Skill of the officers will make military training or lack thereof, one of the key elements in the conflict, along the morale of the combatants.

The scale is set to platoon level, with units representing groups of between 30 and 40 servicemen. Each hexagon in the map portrays a distance of 150-200 meters (roughly 165 to 220 yards). The scenarios are divided in turns that symbolize approximately 12 to 15 minutes of action.

The saga is based in the principle of the simultaneous execution We Go. In each activation you will move a single company, so there is no waiting between turns! This title also brings a set of adapted and didactic rules, to ease the learning curve for new players. After a few pages, you will be able to play the first scenario. The heart of the War Storm Series relies in the command, being the officers the keystone of the game. Help Arrives! goes one step further, introducing a new concept in the series: Tactical Ability. The game uses isomorphic maps and each one may be linked with the others by any of the edges.