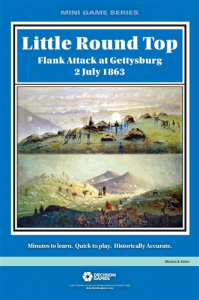 Robert E. Lee’s invasion of Pennsylvania resulted in a collision at Gettysburg. The first contingent of George Meade’s Union army had been routed, but remained on the field southeast of town. For the second day of battle Lee planned a wide flank march to roll up the apparently open Union left. Instead, the flanking column arrived to find an entire Union corps astride their line of attack. Changing direction, the Confederates crushed the Union line, but the Union reserves arrived in the nick of time to form a new line anchored by the rugged massif of Little Round Top. Had they failed, Meade’s army would have been all-but trapped.

Little Round Top uses the Musket & Saber QuickPlay system to portray battle in the American Civil War. Combat is based on unit quality rather than numbers, and rewards use of historical tactics. Infantry—tough and resilient—bears the brunt of battle. Artillery can smash attacks or open holes in enemy lines, but is vulnerable and brittle. All units are susceptible to rout when weakened, so reserves are a must. Leaders enhance unit capabilities.

Winning depends on careful deployment, balancing maneuver and attacks, and judicious use of leaders.