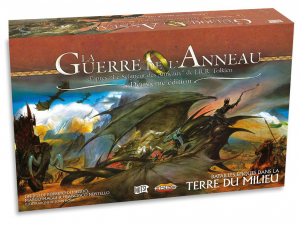 Welcome to Middle-earth and its strategic board game The War of the Ring. Players take part in the struggle between the armies of the Free Peoples and the heroic Fellows of the Fellowship of the Ring and the dark hordes of the Shadow and the powerful Servants of the Dark Lord.

In a game of The War of the Ring, the player controlling the Shadow attempts to conquer Middle-earth by using his military superiority. He gathers, under his command, Sauron's legions of Orcs and Trolls, the forces of the wizard Saruman and the hordes of Suderons and Orientals, to cover the West with darkness. In the face of this onslaught, the player of the Free Peoples leads an alliance of Elves, Dwarves, Riders of Rohan, Men of Gondor, and Men of the North: a fragile union attempting to defend the last free kingdoms of Middle-earth and buy precious time for the success of the Ringbearers' Quest.

As the armies clash, the nine Fellows of the Fellowship of the Ring travel to the heart of the Dark Lord's domain - Mount Doom - to destroy the One Ring in Mountain of Fire. Controlled by the Free Peoples player, the Fellowship is his real chance to win, with the Shadow military forces defeated along with their master if the Ring is defeated. But the Quest faces increasing dangers as the Darkness spreads across Middle-earth... In the end, only one side will be victorious.