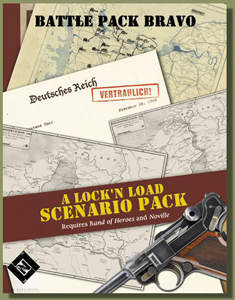 Lock ‘n Load: Battle Pack Bravo contains 12 new scenarios for use with the components found in Band of Heroes and Noville, Bastogne’s Outpost; and they are available for EITHER immediate download from our Web site, or proffessionally PRINTED, carefully placed in a zip-locked bag, and mailed to your door. From Normandy to the Hürtgen Forest, to Monte Cassino and Anzio in Italy, Battle Pack Bravo has you covered. It also includes a return to Noville, Belgium, as the Battle of the Bulge wanes down.

Cassino Royale: A tempest in a teapot. One map. One NEW map (pictured below), but over 45 squads and Leaders, not to mention nine armored fighting vehicles.

Pushing Back: Easy Company of the 506th PIR attacks Noville in January of 1945 as the Americans clean up the last vestiges of the German salient in the American lines. Uses the Noville map and the Band of Heroes paratroopers. of Cool new Battle Pack Bravo Battle Map

Bloody Crossroad: An adaptation of Forgotten Heroes's "A Friend in Need." Great scenario for those short on time.