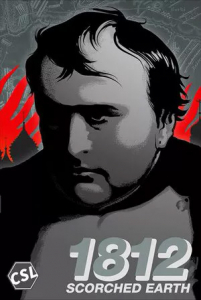 1812 is the third game of Conflict Simulations LLC's 2140 series, small-footprint wargames that play within 2 hours and no more than 140 counters. It covers the French invasion of Russia in 1812 and their attempt to force a political collapse against the Tsar.

Units are infantry corps and cavalry divisions, who each belong to one of their nation's Army Groups. Army groups are led by leaders who generate Command Points each turn, used to order units under their command.

Combat has players rolling 1-3d6 depending on the number of Strength Points being used in combat. Both sides must manage Attrition as to make sure not to whittle away their forces needlessly. The game covers the drive on Moscow from late June through the end of December of 1812. Prussian and Austrian units are included as they were present historically.

Each hex is approximately 25 miles. Each turn covers 2 weeks and each Strength Point is the equivalent of 10,000 men and their accompanying artillery batteries.