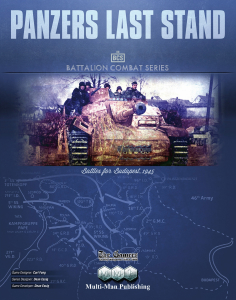 Panzers Last Stand is a Battalion Combat Series game depicting the Axis relief operations of Budapest from January to March 1945 in what became Germany's last major offensives in the war. The campaign game covers the Konrad Operations (I, II, and III) in January 1945. There are scenarios for each of the Konrad Operations as well as Operation Southwind in February and Operation Spring Awakening in March 1945.