Lock 'n Load: Not One Step Back 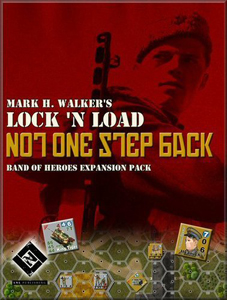 Our biggest expansion ever, Lock ‘n Load: Not One Step Back is Lock ‘n Load’s first foray into the Eastern Front of World War II. This expansion includes the units, rules, and scenarios that gamers need to recreate the desperate struggles on the Russian steppe, ruins of Stalingrad, and partisan-infested woodlands.

Command awesome Soviet heavy tanks, such as the KV-1, SU-152, and JS-2. Brew up hapless T34 tanks with your incredible King Tiger. Use the Soviet Guards to lead counterattacks in the city, and the new German Pioneers to retake lost ground. Ambush German convoys with Partisans and whip cowards back into line with Commissars.

As you have come to expect from Lock ‘n Load Publishing, the art is superb. David Julien, Marc Schwanebeck, and Nicolas Eskubi have combined to make soldiers, tanks, and maps that pull you into the conflict and won’t let go. Better still, by popular demand, the hex halos have been seriously tuned down. 255 die cut counters and three, mounted geomorphic mapboards. Take a look; we think you’ll like it.

Big Cats at Twilight: A King Tiger and some Panthers take on Soviet heavies, such as the JS-2, as the fight to relieve Budapest.

A Bitter Holiday: It’s late December 1942. The Soviets close the ring on the German defenders of Stalingrad.

Bridge Over the River Dnepr: Soviet partisans and paratroops ambush a German convoy.

A Room at the Inn: Soviets and Germans, searching for shelter from the cruel Russian winter meet in a small town. He who controls the huge, Orthodox church survives the night.

And 7 More, Including Prochorovka, Kalach Bridge, Keeping the Door Open, Rattenkreig, Stae Farm is There, and Tough as Nails. The scenarios have all been designed by Marl H. Walker and Dale Holmstrom. For a sample of what the scenarios are all about, click here to see the first page of Cats at Twilight.