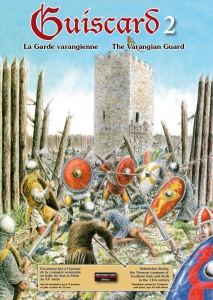 GUISCARD simulates the epic conquest of Southern Italy and Sicily be the Normans, led by Robert Guiscard ("the cunning" or "the weasel"), in the eleventh century. The game will boast the various factions of the time as the Byzantines, the Arabs of Sicily, the Lombards and the Normans of course, who came as mere mercenaries in the middle of this mess of conflicting interests and who decided to seize power by arms. GUISCARD is intended for those who want to play Cry Havoc but can no longer get an original box. Unlike other proposed extensions of Cry Havoc Fan, GUISCARD is a complete boxed game with counters, maps, rules, scenarios and play sheets.

This new version will include all the materials of the original game, but with counters printed on much thicker boards, new additional counters and a campaign game. New scenarios will feature the Varangian Guard of the Byzantine emperors.

7 full-color maps, giving a possibility of many different terrains;

1 36-page booklet (in English or French) including the historical background, a guide to the playing pieces, 14 tactical scenarios and 6 campaign scenarios;

3 dual-sided play sheets (in English or French) for handy reference;