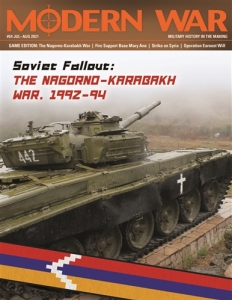 The Nagorno-Karabakh War: 1992-1994 is a two-player wargame of the war between Azerbaijan and the breakaway province (Oblast) of Nagorno-Karabakh, inhabited by an Armenian majority. After the first ethnic clashes between Armenians and Azeri, during the death throes of the Soviet Union, Nagorno-Karabakh declared independence from Azerbaijan. The Azeri launched an ethnic cleansing campaign. Faced with annihilation, the Armenians resisted and fought back. The Armenian player must fight a numerically superior foe but he has the advantage of interior lines and a unified command. The AZ player has a greater supply of former Red Army weapons and ammunition but must fight not only the Armenians but also political infighting and low morale. Each hexagon encompasses about 10 kilometers (6.2 miles). Units of maneuver are battalions. There are nine game turns each representing three months.