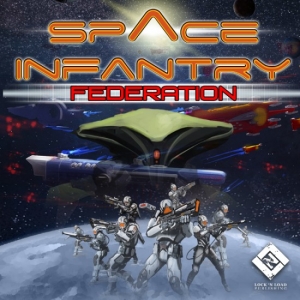 We the People Stand with our Federation

Space Infantry Federation, is a new game designed by Nathan Hansen in the Space Infantry Universe with you as the leader of the Space Infantry military. The Federation has achieved the technology necessary for interstellar travel, giving us the capability to expand the empire beyond the solar system. However, it turns out that we are not alone in the universe! Five rival alien races – the Cuthonians, Flesh Eaters, Cybers, and Mutants – are not too thrilled at the Federation's advancement into what they believe is their territory. Top that off with the lurking threat of a band of fearsome Mercenaries, a race to achieve the best technology, and the ever-shifting tides of diplomacy and war, and Space Infantry Federation is a game that – both literally and figuratively – takes place on a galactic scale.

Many things can go wrong on this journey. If an alien race starship is in Sol by the end of one's turn, the Earth is conquered and the Federation has fallen and will be lost to their new overlords. If Federation Stability drops to zero, anarchy will reign supreme. If all of the aliens achieve technology beyond what the Federation could ever dream of.

But even with all of these ways to fail, you are determined, and if you can lead the Federation to take over the exoplanets in the various enemy territories, we will have an established foothold in galactic affairs for millennia to come. However, to do this we must build starships and space stations, maneuver those starships to other worlds, research new technologies, spy on the advancements of our enemies, and keep up the morale on the homefront. Meanwhile, you must work your way through the political tides with the alien races which are always in constant flux; There are many ways to win or lose our Federation, good luck Commander.

Make no mistake, Space Infantry Federation will test your leadership in all-new ways. Will you guide your star fleets and resource wisely.

Requirements: Space Infantry Federation is a complete game and requires nothing else to play.