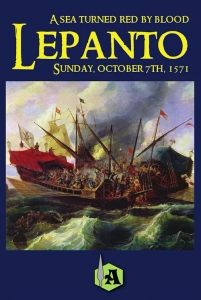 The calm Aegean sea is going to be, once again, the scene of one of the most important battles in history. The fleets of the Ottoman Empire and the Holy League, created by Pope Pius V, are ready to clash in the waters in front of the little town of Lepanto. At the end of the day, after one of the fiercest battles in the long history of naval combat, the Ottoman fleet breaks away following the loss of more than 150 ships and 30.000 men.

Now the sea is red, a sea turned red by blood.

400+ counters, 6 player aid cards, 3 maps, a rules book and a playerbook with examples of play.