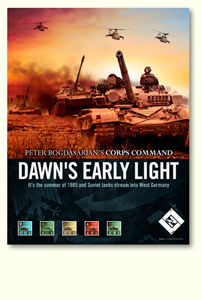 The Soviet First Tank Army crosses the border into Germany and strikes into the Eisenbach Gap, seeking to rip open the belly of NATO's defenses. American and German troops scramble from their bases to try and delay the Soviets, for if they get through, they will drive all the way to the Rhine. Over two thousand tanks will meet in the decisive engagement of the war.

The Corps Command system returns with a modern twist! Asset chits allow players to bring in reinforcements and influence the battlespace with gunships, chemical attacks and electronic warfare. New defensive fire rules give an attacker a reason to sweat and encourage players to match their units to the right terrain. All of this with the same lean, mean and simple system as the first game in the series, Corps Command: Totensonntag.

The Soviets hit hard but fold fast - as their units wear down they lose initiative, making them less and less capable, and the clock is against them. The NATO (American and German) forces defending the Gap are highly capable but are outnumbered and playing for time. Both players are being asked to do the impossible - to win the greatest tank battle of all time.

Corps Command games are designed to be played - they are light on rules and require merely a couple hours to finish. The emphasis here is on lean, mean and simple.

The heart of the game system is the initiative mechanic. The players' initiative rolls determine not only who acts first, but also which units move and how far they go. A player will often be forced to decide between getting there fast and arriving with the biggest force.

Combat hurts and then it kills. As units accumulate hits, their combat effectiveness gradually declines until they finally shatter and fall apart completely. Players will want to pull their forces back before they reach such a level of misery and degradation, but will the initiative system give them the chance to do so?

Neither player is a spectator. The Soviets must attack, attack, and attack again. NATO, however, cannot sit idly by, lest it be defeated in detail. The ridge that divides the map forces the West German/American player to defend two fronts, and how she allocates her resources will often decide the battle. The strategic situation, combined with the initiative system, ensures that no two games will play out the same way.