Into the Lion’s Mouth 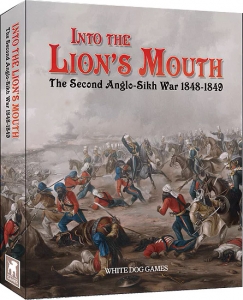 Following the British victory in the First Anglo-Sikh War (1845 – 1846), the Sikh Government of the Punjab (the Lahore Durbar) effectively came under the control of the British East India Company. In April 1848, two British officers were sent to the prosperous south western city of Multan to take over the running of the province from its governor, Diwan Mulraj Chopra. They were murdered by soldiers of the city’s garrison, apparently acting spontaneously and without the prior knowledge of the startled Mulraj. Nonetheless, after some prevarication, he supported their actions, and thereby found himself the leader of a rebellion against the British.

There were few Sikhs in that part of the Punjab: the garrison was mainly Muslim, and the Mulraj was a Hindu. Because of this, the East India Company regarded the uprising as a purely local affair and sent troops to lay siege to Multan in the expectation that this would quell the rebellion. These included a large body of Sikhs, supposedly loyal to the British, under the command of Sher Singh.

It is now late October 1848. Coming to sympathize with the Mulraj’s grievances against the British and to appreciate how these are shared by the Sikhs, Sher Singh has changed sides. His men have withdrawn from the siege and are marching north east towards the Punjabi capital, Lahore. Sher Singh’s father, Chattar Singh, has also rebelled against the British and is besieging the fort at Attock which guards the road to Afghanistan. Inspired by the defiance of Sher Singh and Chattar Singh, anti-British disturbances have broken out in towns and cities across the western Punjab.

In response, units of the British East India Company are assembling at Firozpur where they will become the “Army of the Punjab”, under the command of Lord Gough. Gough plans to march against Sher Singh before he is reinforced by Chattar Singh. The monsoon season has ended. Campaigning can commence. So begins the Second Anglo-Sikh War 1848 – 1849.

Into the Lion’s Mouth is a two-player beer-and-pretzels game by designer Steve Pole which gives players the opportunity to replicate the British success in re-establishing control over the Punjab, or to re-write history by leading the Sikhs to victory.

A Game Map depicting the varied terrain of the Punjab

An innovative mechanism to simulate the “fog of war”

British capability of moving men and materiel by river

The possibility of Afghans and Kashmiris joining the conflict

Optional Rules reflecting the strengths and weaknesses of the principal commanders