World at War: The Untold Stories 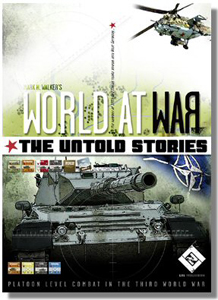 World at War: The Untold Stories recounts the struggle of Warsaw Pact and NATO allies previously not covered in World at War modules. Included are the battles of the Canadians, East Germans, Poles, Dutch and Belgians as each fought desperately to survive in the opening days of the war that ended all wars.

Battle over a plethora of new terrain. The Untold Stories contains three 11" x 17" geomorphic, mounted maps that not only give variety to the game’s scenarios, but can be used by gamers everywhere to create their own World at War stories.

Twelve, spanking new scenarios. Canadians versus Poles, East Germans versus Danes, Belgians versus Russians. It’s a veritable smorgasbord of war. Fight with the Canadian 31 Brigade Group as they valiantly battle Soviet T-80s with their Leopard I tanks, or command East German T-72s as they fight their West German brethren.

It’s a complete, boxed game. Rules, players aids, box, everything you need to play. Here what you get.

World At War A full-color rules and scenario book including 12 scenarios.