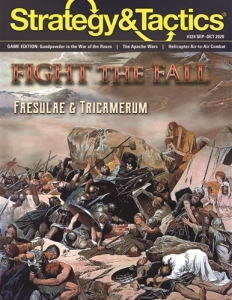 Fight The Fall: Faesulae A.D. 405 & Tricamerum A.D. 533 is a two-player wargame system that simulates the battles that occurred during the era AD 376 to 560, roughly the time from when the Goths crossed the Danube to the Byzantine reconquest of the west.

The game system emphasizes command control, leaders and unique tactics. Players pick command markers to generate actions, modeling the chaos of the battlefield. The objective is to gain victory in battle, usually by destroying enemy units and morale. Each hex represents an area about 100 yards across. Each unit represents from 400 to 2,000 men. This game includes two scenarios: