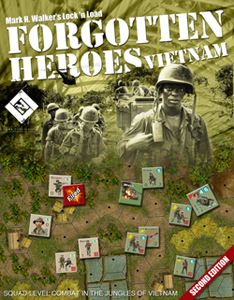 "The game’s impulse system keeps both players actively involved in every minute of play. The game is squad based and units represent each nationalities’ squads, half-squads, weapon teams, and vehicles.

"The single man counters include leaders, medics, heroes, chaplains, and snipers. Each significantly affects play. And each leader and hero gets a randomly selected Skill Card before the scenario begins. These cards bestow benefits such as stealth bonuses, ambush experts, and many others.

"Lock 'N Load: Forgotten Heroes Vietnam is a fast moving, fun to play, tactical level game of small unit actions in the Vietnam War. While players will find it to be an accurate depiction of squad level combat you won't have to wade through a hundred pages of rules to play. In fact, you'll be up and playing after reading less than a dozen pages of rules!