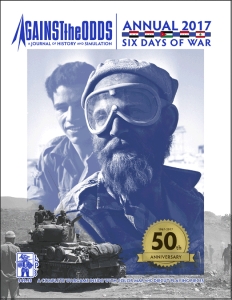 Over 50 years ago, Israel made pre-emptive attacks against the neighboring Arab countries that had vowed to destroy her… and won. It changed everything. And yet, it also established a kind of stasis in which little seems to have changed in those subsequent 50 years. How can that be?

First comes the amazement that a war fought with a mixture of weapon types that ranged from the very latest jets to leftover WW2 equipment… yet reached a decisive conclusion in less than one week. With today’s “little wars” that drag on year after year, the idea of a real conclusion in just a week—with a declared winner and losers—staggers the imagination.

Second comes the unfathomable idea that, in spite of this decisive victory, Israel remains the center focus of world politics and few supporters, many detractors, and a few dire enemies.

What happened in 1967? Possibly the single most decisive “battle” in history, which was really a series of battles Israel fought against a series of foes, all with the declared intention to erase the name “Israel” from maps of the Middle East. How did this happen? As is usually the case, you can read about it in books from various perspectives, but understand it far better when confronted with the decisions commanders had to make on both sides.

Six Days of War begins with a Strategic Segment of card play and counter-play as each side adjusts its diplomatic standing and “war footing” and shifts unit positions on the map. This is a tense and fascinating game-within-a-game, where cards are played, rescinded, or “trumped” (at a cost) and Random Events can vary from nothing important to forced actions which perhaps neither player will like. Will the UN peacekeepers be kicked out? Will Jordan give up its neutrality? This stage of the game feels like newspaper headlines, but players can influence the “news.”

Eventually the war will break out and players will have to jockey for initiative and conduct combat operations as effectively as they can, all while knowing the UN could call for a cease-fire at any time.

Six Days of War comes with 245 full color, die cut counters representing Israeli and the various Arab states involved in the fighting, with a 22" x 34" color map divided into THREE distinctly different battlefield areas, covering the Sinai Peninsula, the West Bank, and Galilee/Golan. Ground units are mostly brigades and regiments while air units (with extensive coverage of the many plane types) represent 24 to 36 planes. Each full game turn equals one day, with 10 turns as the maximum possible time.

The game also includes a historically based scenario that makes for a faster beginning (with no preliminary card play) and serves as an excellent solo game. Also included is a scenario showing “Ben Gurion’s Nightmare,” with a more subtle Arab diplomacy and a less attentive Israel meaning the starting positions are different in key ways. This represents an extreme challenge for the Israeli player. There are also optional rules which explore “what if?” events or can be used to balance play.

Can you, as the Israeli commander, not only survive and defeat your opponents but create a better future for your country? Can you, as the Arab player, avoid the devastating pre-emptive strike and carve out a long-term victory against a powerful opponent?

Can either player make these “six days” something that makes for a better future? The choices are yours, with Six Days of War.