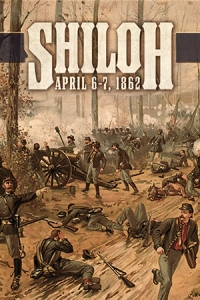 SHILOH 1862 is Volume II in Worthingtons Civil War Brigade Battle Series. With streamlined mechanics, only 8 pages of series rules, and battle specific rules, gamers can refight the Battle of Shiloh in 2 to 4 hours.

Gamers who own Volume I Antietam 1862 will be up and playing Shiloh in minutes as they share the same series game rules for each game, and each has limited special rules that reflect events significant to that battle.

Here is a link to some After Action Battle Report, with pictures: https://boardgamegeek.com/thread/2258254/shiloh-battle-game-play-aar-0500-0800

Each infantry and cavalry piece is a brigade with each strength point 100 men, color boxes surrounding the strength show morale of green, veteran, or crack. Each artillery piece strength point represents 2 cannon. Leaders are represented to make sure players maintain command control.