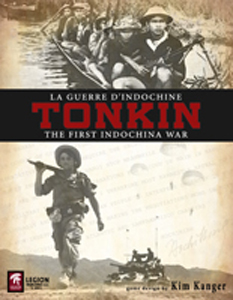 Tonkin is a two player game that covers the crucial period of the First Indochina War fought between the Viet Minh and France from 1946 -1954. The game focuses on the intensive years from 1950 - 1954 in the northern part of Vietnam, called Tonkin, and Laos. It is a game of high interactive play where both players have a set of ten operation points and a number of supply dumps. By spending operations points you will be able to perform different, mostly non-combat, actions. By expending a supply dump you will also be allowed to perform combat missions. But there will be a limited number of supply dumps to expend and they will also be needed to keep units in supply. When you spend operation points you will only be allowed to spend one, two or three points in a row before it is your opponents turn to spend his.