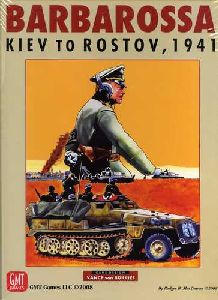 Barbarossa: Kiev to Rostov is a two-player, or two-team, operational level game depicting the battles of the southern wing of the Axis invasion of the Soviet Union during 1941. This game picks up where an earlier game in this series, Barbarossa: Army Group South, left off. It begins in mid-August and ends in December 1941, historically near the cities Kharkov and Rostov.