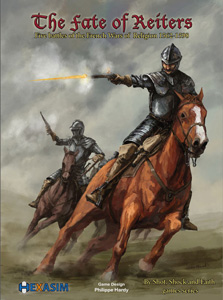 "The Fate of Reiters" is a grand-tactical simulation of French Religion wars that occurred in France from 1562 to 1598. Unsing the same game system than By Shot, Shock and Faith, it recreates five battles of the era between Catholics and Huguenots on area-maps.

Compared to the previous opus, the graphics of the counters have been revised to improve their readability. Henceforth, a Combat Rating inside an orange triangle denotes a unit armed with shock weapons (pole arms, etc) while a unit that fires at close range has its Combat Rating inside a yellow disk.

Cognat (6th January 1568) : A Huguenot troop en route to join Condé’s army, which is besieging Chartres, crosses the river Allier on the Vichy bridge and heads West. Coming out of the Randan wood in the village of Cognac (today Cognat), which stands on a small height, the troop finds a Catholic army standing in their way in the Limagne plain down below. 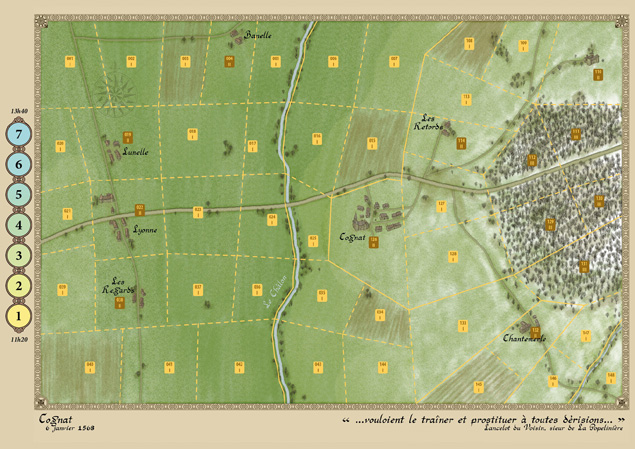 Dormans (10th October 1575) : A German reiters corps, recruited by English Protestants and by the Malcontents, is led by Guillaume de MontmorencyThoré to the Prince of Condé’s army located in South-Western France. Henri de Lorraine, Duke of Guise, leads Henri III’s men with the objective to stop these insatiable reiters that insolently carry their wagons full of loot through France’s countryside. Henri de Guise gathers his men on the heights of the Marne river, near Dormans where the Protestants are sleeping…

Vimory (26th October 1587) : The Protestant troops established their encampments in several villages separated from each other by about 20 kilometers. Those stationed in Vimory, in the middle of this large mesh, are feeling secure and do not to put anyone on picket duty; Catholics arriving from Montargis (North) will surprise the reiters… all unmounted. The men of the Duke of Guise must strike quickly as other Huguenot troops are standing nearby threatening to reinforce their peers.

Auneau (24 November 1587) : On their way to cross the Loire River (to the South of the map) to meet Henri de Navarre’s army in South-Western France, the reiters decide to stop at Auneau. As the castle is being held by a small Catholics garrison, the reiters camp in the other parts of the village. Under the cover of night, the largest part of the Catholics troops enters the village through the castle’s garden. 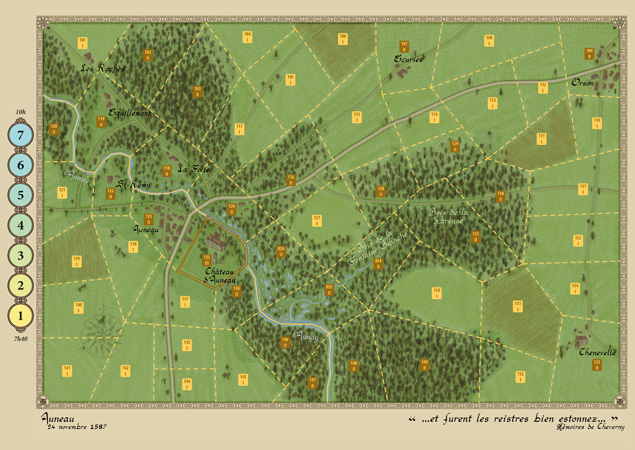 Métrieux (10 décembre 1587) : The Pilat massif, December 10th, 1587: the weather is cold and unpleasant, the sky low and grey. After the defeat at Auneau, facing the Duke of Guise, on November 24th, a small contingent of Protestant soldiers tries to get back to their homes in the Vivarais. The troop is composed of about a hundred cuirassiers and two hundred arquebusiers on horses. Their leader is François de Châtillon, the son of Admiral Coligny. Through forced marches they managed to maintain a gap between them and their pursuers, the Catholic army of Lyon, that was ordered to intercept them. The men are as exhausted as their horses, gripped with the fear of crossing the Pilat, a place hostile to them, but they believe some miracle might help them reach their homes before the night. The Catholics, far more numerous, anticipate an easy fight against this small troop and are already turning their heads towards the baggage wagons. This small battle is intented to be an introduction to the sytem, with a small map and few counters. 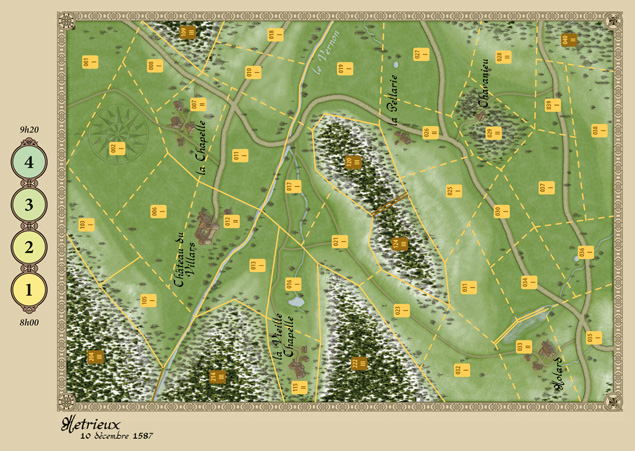 This is a classic game system ; « I go, You go », of average complexity, including, during the active player's phase, a sequence of reaction from the passive player, such as fire, counter-charge or tactical backstep. The maps are divied in areas from 300 to 500 m by side. A color code allows to easily determine the costs of movements and the line of sight. The scale of the game is one unit for 100 to 500 soldiers or one or two guns. One game turn represents a duration of 20 to 30 minutes. A corps represents either a vanguard or a rearguard, or the main body called battle.