The Habit of Victory 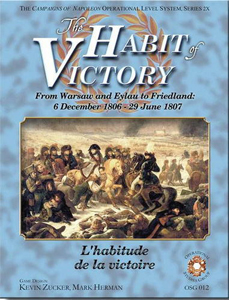 THE HABIT OF VICTORY

Campaigns of Napoleon System, Series 2X. Game Mechanics are the same as Napoleon at the Crossroads, with the addition of the cards.

Each card represents a Movement Command specifying attrition, administration, etc., and allows for one-time events such as: political, military, officer feuds, and guerrilla war. Because they define Movement more closely, the cards make attrition a matter of a quick read-off at a glance.

Three full-sized campaign scenarios depict the three phases of the war-the Crossing of the Bug and Battles of Pultusk and Golymin, the campaign and battle of Eylau in February, and the final miscalculation by Bennigsen at Friedland.

A massive Grand Scenario of up to 69 turns.

During major battles entire armies can be concentrated under just a few leaders. At other times units can be dispersed independently along with Cavalry Vedettes which help confuse the enemy.

100 playing cards that represent March Orders the players can issue

56 pages of rules including campaign analysis, designers notes and more