Dawn of the Zeds Expansion Pack 3: Rumors and Rails 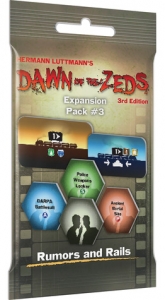 The third Dawn of the Zeds: Third Edition Expansion Pack features two new game systems. In the first, Refugees are more helpful than ever ?as they bring ?with them Rumors about incredibl?y useful? items ?for? the ongoing battle?.? ?All 16 ?Rumor chits provide heroes with special goodies or abilities ?when discovered, such as the DARPA Battlesuit that allows any hero to be Tough, or discovering the Secret Airbase that provides a free heal, research or event action each turn! ? The second game system features two trains operating ?from? ?the town's rail junction, providing? heroes with new modes of transportation? as well as becoming supplemental barricades!